Our colleagues at NAMI-NYS just put out a comprehensive report on the crisis service system in New York State. The voice of the families is essential in any crisis response as we have often been the intermediaries
between law enforcement and the hospitals.

We look forward to reviewing and continuing to work with NAMI-NYS and other advocacy groups in responding to crisis services in New York.

Register for Reimagine: A Week of Action to Reimagine Our National Response to People in Crisis 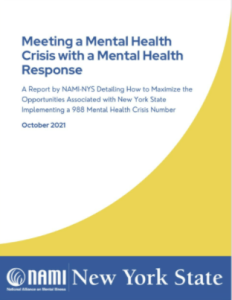 NAMI-NYS is working to address the traumatic and oftentimes tragic outcomes that occur when law enforcement has to intervene with people living with a mental illness when they are experiencing a crisis situation, with the release of our sweeping report; Meeting a Mental Health Crisis with a Mental Health Response-A Report by NAMI-NYS Detailing How to Maximize the Opportunities Associated with New York State Implementing a 988 Mental Health Crisis Number.

Since 2015, nearly one in four fatal police shootings nationally have been of people with mental illness and of those, one in three were people of color. Unfortunately, New York has not been immune to this heartbreaking and avoidable trend, as the death of Daniel Prude in 2020 at the hands of the Rochester police is just the latest in a line of New Yorkers who lived with mental illness and lost their lives by the hands of police. These tragedies are even more frequent when it comes to police response to people of color in a mental health crisis. Other prominent recent examples of New Yorkers from communities of color living with a mental illness who died by police responding to their crisis include Deborah Danner and Saheed
Vassell. The 2020 pepper spraying incident of a nine-year old girl experiencing a mental health crisis in Rochester also speaks for the need for the reforms NAMI-NYS is recommending in the report

“The New York State Office of Mental Health has made great strides in this area and has demonstrated a commitment towards appropriately responding to mental health crisis situations”” says *NAMI NYS president, Mary Bartlett, adding “but the stories of our members contained in the report demonstrate that New York’s families are still being traumatized by negative interactions with law enforcement. The report provides NAMI-NYS recommendations on how to build on existing New York State initiatives and create a fully functioning statewide mental health crisis response system, which puts people on the road to recovery and frees up law enforcement to do the job they signed up to do.”

The report details how, along with a 988 number to call during a crisis, having specially trained mental health professionals respond to these calls and having recovery oriented crisis stabilization services to take someone who needs to be removed from the crisis location are both integral elements needed for an appropriate mental health crisis response. The report also details the funding available to establish and sustain the three crucial elements of a mental health crisis response.

Key Recommendations from the Report:

Share the Report on Social Media and With Your Local Officials

The timing of the report is crucial as New York is now deciding what elements will be used to pair with the implementation of the 988 mental health crisis number in July and how these initiatives will be funded.

Your voices are needed to promote the report in your local communities and
to your local officials.

NAMI-NYS’s crisis response report also highlights harrowing stories from our members demonstrating how the lack of a mental health crisis response system is negatively impacting individuals and families experiencing mental Illness. On *Thursday, November 18th, NAMI-NYS’s associate director, public affairs, Matthew Shapiro will be presenting on the importance of using stories as an advocacy tool at the NAMI sponsored REIMAGINE: A Week of Action to Reimagine Our National Response to People in Crisis,
taking place November 15-19*. *We highly encourage NAMI-NYS advocates to participate in *Reimagine*, you can click here to learn more and register for the free event.

NAMI-NYS unveiled the report last week at our education conference. 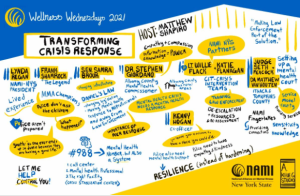 As stated earlier, transforming crisis response is a leading priority for NAMI-NYS and we have been active discussing these issues in the media.

Click here  to watch a report from NTD News where NAMI-NYS discusses the need for mobile crisis services in the NYC Subway system.

Click here to watch a WCBS, New York City report on incidents in the NYC transit system where NAMI-NYS discusses the impact of budget withholds and bed reductions on people with mental health issues and the need for diversion services.

Click here to watch a report from WCBS in New York where NAMI-NYS explains the need to improve services for those coming out of jails and prisons with mental health challenges.